Nothing much to report! got my frequency sets done, managed to get 2 chin-up ladders so 40 in total today – Still feels a bit weird walking over to the park to do a ladder on the kiddies monkey bars! Wonder what the locals think? Forcing myself to do it anyway as I really want to keep it up to increase my chins. The overall volume is also good for mass, think of a mechanics forearms or a postman’s calves..

I finally found a decent gym! Good old word of mouth, one of the guys at CF Dynamic gave me the number of his mate who referred me to the butcher who owns a gym! – £20 a month and you get a key so you can train whenever you want! 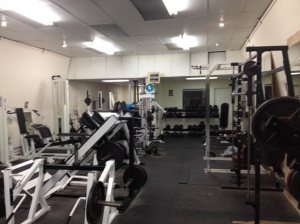 Does it get better? It’s a proper spit and sawdust place with absolutely everything you can think of jammed in!

Had a great session down there:

Oh yeah, and just to top it off, here’s the ‘cardio’ area!

It’s nice to see their priorities are right! ha ha!

Also got my frequency sets in to include 3 chin-up ladders so 60 reps total. A darn good days training 🙂

Sat in traffic for over half an hour without moving due to the County Show, so missed the normal met-con class – Grr! Gave up and turned around once I knew I’d missed the start of it. I suppose on the plus side it means I can now go to the open gym tomorrow and Saturday so can get in two strength sessions this week 🙂

Got my frequency press-ups done and managed to get down the park in-between rain showers and do a couple of chin-up ladders:  1/2/3/4/5,  1/2/3,  1/2,  1 – then did the same again after a couple of hours to total 50 chins – I know it’s not strictly ladders as failed to get round 4 (will probably just go to 4 next time as forced rep 5 out which kind of defeats the point of the frequency method). But I’m happy to get them done at all, and as it worked out was the only thing I ended up doing today anyway!

Gale force winds and heavy rain meant I didn’t get out there for some ladder chin-ups! got my planned frequency sets both yesterday and today. So now up to 6 sets of 23 press-ups, will keep these up for rest of week and shoot for 7 sets starting Monday.

Been getting some great feedback regarding ‘Hench’ eBook, got a few pointers to address and still need to get those illustrations done! But hoping to have it out there by the end of the month. (Figure if I give myself a date I’m going to push harder to get it finished!)

I got my planned 8 sets of 20 frequency press-ups in today, going to shoot for 6 sets of 23 starting tomorrow. The whole point is to stay as fresh as possible so as not to effect strength training, so I’ll see how they feel. There’s a chapter in my book dedicated to this if your wondering what I’m on about!

There’s a local park just around the corner so I’m thinking about maybe throwing a few ‘ladder’ chin-up sets. Is it inappropriate for a big bald guy to be banging out chin-ups in a kiddies park? (If no-ones around of course!)