After 8 weeks the back focus is finished, I’m happy with the results as there has been some definite improvement both in strength and aesthetics.

So to summarise – Weight has stayed roughly the same, but inches have been gained or lost in all the right places! (except the good old calves which have remained stubbornly the same despite regular training that I wasn’t previously doing … grrrr!) Traps have become more pronounced as planned and also gained a ¼ inch on my arms – which is nice 😉 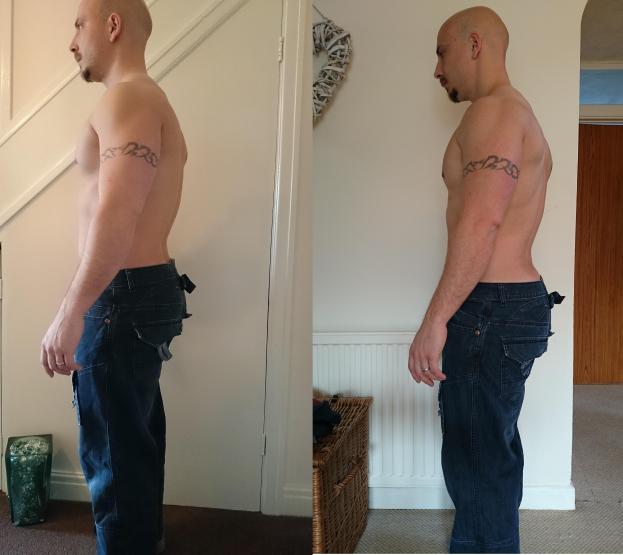 Lifting Straps – Should you use them?

Should you use lifting straps? It’s yet another massive debate with people on both sides passionately arguing the case for and against them.

Having had a crossfit background, I have been guilty of judging people on using them myself. However, since strength training I’ve been bringing them in for my heavier topsets on deadlifts and I’m getting a couple more reps, so definitely see the benefits. A lot of the for arguments are that there’s better Lat isolation or they say ‘I feel it in my back more’ or even just being able to perform more reps with a weight that they can’t without them.

When performing deadlifts, rows or pulldowns, the majority of the time your grip will give out before your back will. If you use straps a lot you will need to add in some grip work on top of everything else. Grip training itself is extremely taxing to your CNS and is difficult to recover from as everything you do involves your grip to some extent. My advice? Don’t use them every set, just when grip is starting to become an issue with the weight you’re using. That way you’re not having to do additional grip training and you can reap the benefits of being able to go heavier on your lifts.

Additional info: Pros and Cons of Strapping up, Using Straps to Build Muscle – Sean Nalewanyj, How Using Straps Can Save Your Back and Elbows – Jason Ferruggia

Build a bigger back with Yates rows

You wouldn’t believe how much mis-information there is on this! Just a simple search on google will give you thousands of differing opinions on whether it is a good or bad movement, some will claim it’s no good at all! I would say take a look at Dorian Yates

and ask yourself, does this man look like he knows what he’s talking about when it comes to a big back? I really like this lift, it feels like it’s really hitting the lats hard performed properly, and unlike standard barbell rows or Pendlay rows, there is far less stress on the lower back. The biggest problem most have is executing the lift properly. Dorian used to use an underhand grip, but as the weights used were getting huge, he ended up doing the inevitable and injuring his bicep tendon and now uses a narrow overhand grip instead. The main two mistakes most people make are flaring out the elbows, and pausing at the top of the movement. This is a power movement and should be treated so. Use the heaviest weight you can and keep the body still! For a more in depth definition here’s the man himself.