Hyper-Lordosis or Anterior Pelvic Tilt, what is it? and how does it effect lifting?

Firstly I’ll start with a correction – Everyone has lordosis! It is the natural curve of the lower spine (lumbar), it’s commonly confused with hyper-lordosis which is an exaggerated curve in this area. When lordosis is being described it is usually being confused with this.

Hyper lordosis is usually characterized by a protruding stomach and a deep lumbar curve making the bottom appear larger/stick out. Women are stereotypically more lordotic, but the condition effects many men as well, especially with a sedentary lifestyle.

It is commonly caused by overdeveloped or tight hip flexors (although some of us are just born with it). These pull the lumbar spine forward which in turn tends to cause lengthened or weaker abdominals,  which then cause inactive glutes and an overdeveloped lower back due to the force acting on it whenever standing or walking. I spoke about these previously in August in a post entitled ‘Ramblings and an article or two’ where I included a link to T-Nation’s article ‘Force Couples’. However to put it simply the hip flexors are the biggest culprit for hyper-lordosis as we as a species generally spend too long sitting and so they become shortened over time pulling the pelvis forward into APT. 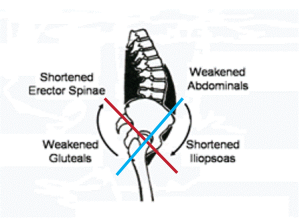 To give you a better idea of this, see the following image, the strong/shortened and weak/lengthened muscles are highlighted to give you more of an indication of how the pelvis is affected.  Obviously there are different stages of the condition, severe hyper-lordosis can be crippling with a lumbar curve so deep the person appears at an almost 90 degree angle and the spine is at a massive risk of damage/hernia just moving around.

However I’m looking at a mild/light degree of APT that can be treated at home (I’ll come to the treatment in a later post). But, aesthetics aside (who wants to look like they have a fat belly and butt when they don’t?), I wanted to highlight the dangers of weightlifting with hyper-lordosis. When the lumbar curve is in overextension it alters the mechanics of the spine and can lead to injury or herniation of the discs.

The two worst affected lifts are; Overhead pressing – the danger is due to the weight pushing downwards increasing pressure throughout the lumbar region, this will also effect how much weight you can press as the weight will be felt in the lower back rather than the shoulders/triceps. Deadlifting – when the lift is achieved through leaning back (sway back) mainly using the stronger erector spinae (lower back muscles ) as opposed to locking out the hips with the glutes – again putting all the pressure on the lumbar area, but massively limiting the weight as the far stronger hamstrings and glutes are not firing to help the lift. Some may even feel the lower back tightness on a bench press due to the extreme arching caused by the rotation of the pelvis, or during a squat again due to the increased arch.

All of this increased pressure over time can a cause a herniated disc (again aside from looking like a neanderthal!) which will not only slow down your progress somewhat, can well be a weak spot for the rest of your life. Not good .. Fortunately, unlike kyphosis or scoliosis, hyper-lordosis can easily be affected and eased with simple stretching/foam rolling of tight muscles and strengthening of weak/inactive ones. I will post some examples of these over the next few days. Watch this space!

Some of you may have heard of Kroc rows, some may even have used them in a back program. I personally have a real love/hate relationship with them as when performed correctly they are brutal! – Here’s the ‘Kroc’ himself on how to perform them correctly.

As for crunches, never has a particular exercise been more villainised than these! When addressing lordosis or anterior pelvic tilt (or even just plain abdominal training), a full sit-up is far more damaging as it engages the hip flexors which take over the movement once the lower back leaves the floor/bench. The very muscle needing to be stretched/loosened in all but the majority of people, not strengthened or tightened! Crunches can help to shorten the rectus abdomnis and ‘pull the pelvis forward but far better are reverse crunches – Not only can they help alleviate Lordosis

as the pelvis tilts posteriorly to initiate the movement, but also do not aggravate Kyphosis like crunches do as the upper back stays on the ground, shoulders can be kept retracted and the head/neck relaxed.  Of course this would be in conjunction with lengthening aforementioned hip flexors and quads and strengthening glutes and hamstrings. As these are a relatively easy exercise for anyone with a strong core from lifting, i.e. if you can perform 10 or more easily, try using a decline bench (head at highest level), hanging knee raises to chest (avoid straight leg raises as these will make you arch your lower back) or hanging knees-to-elbows (without swinging or using momentum).

Ramblings and an article or two ..

So a nice few days off have done me good, been doing a bit of stretching and some foam rolling and got a fair bit of reading done. More importantly, I’ve bought myself a tripod so I can take the pictures necessary to illustrate ‘Hench’ and get it out there! Going to start these this week, so hopefully will meet my own deadline of the end of the month. (hopefully!)

Most of the reading I’ve done has been into Lordosis/Anterior Pelvic Tilt as although I know I don’t have a bad case of it, I definitely lock out my deadlifts with my lower back NOT my hamstrings/glutes and my posture could do with a little work! (as could just about anyones nowadays!) – A great article with regard to this (and Posterior Tilt) is on T-Nation  Force Couples I would suggest giving it a read even if you don’t suffer from either!

The great Louie Simmons swears by posterior chain strengthening and with so many records/lifters associated with his name, you’d be stupid not to pay at least a little heed! From now on I will be doing this and some abdominal strengthening every training day. I should hope that within a few weeks I should notice some improvements (especially with my deadlift form).

Going to do some more reading into APT and try and get hold of the Westside Methods again, it’s been a long time since I read it! Also keep up with the stretching and mobility on my rest days – DeFranco’s Agile 8 and Simple 6 are great for me, click on the links to find out more.