The Problem With ‘Exercise Science’ 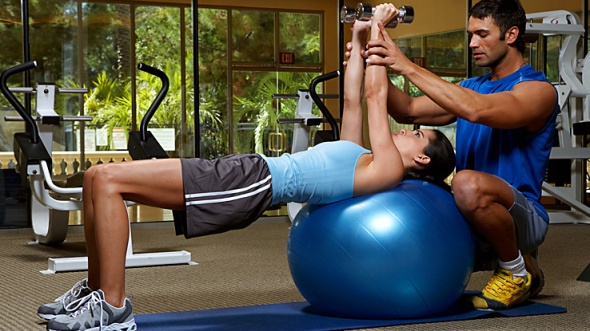 •  Most university-level programs do not equip their graduates to function beyond the commercial gym pin-setter level.

•  Barbell training, the most basic and effective method for improving strength and conditioning, is either not taught in most programs or so poorly taught that it leaves students unable to get real results with their clients and athletes.

•  Many studies that make it into the hallowed “Literature” draw conclusions based on unrealistic, silly methodology and puny weights. It’s clear the “exercise scientists” conducting these studies do not use barbells beyond a novice level, if at all.

•  To get a real education, study a “hard” science, plan for much self-education, compete in your field of interest, and coach lots of other people… for years on end.

Silly BS – Can You Decipher The Good From The Bad?

An old article by Mark Rippetoe, but one of my favourites! It’s no secret I’m a bit of a Rippetoe fan, despite his very strong opinions I enjoy reading his articles due to his style of writing and humour.

“There is a lot of advice, information, and well understood knowledge regarding the field in which I practice—strength training and fitness—that is just silly bullshit. Plain old “SB” (to keep from baiting the censors too temptingly). And it comes from numerous sources: chief among them are medical professionals who think that they are also exercise professionals, muscle magazines published specifically for the purpose of perpetuating it, home exercise and weight loss advertisers, Internet fitness sites, the academic exercise people, and the mainstream media, who are the mindless pawns of the others.” Continue reading –>Silly BS – Mark Rippetoe

Should You Squat Below Parallel? Squat Depth – Safety And Importance

The following is an excerpt from ‘Starting Strength’ by Mark Rippetoe and Len Kilgore. It breaks down in detail, why the squat should always be performed to full depth (where injuries do not prevent it) and describes the stresses on or around the knee and hips.

The full squat is the preferred lower body exercise for safety as well as athletic strength. The squat, when performed correctly, is not only the safest leg exercise for the knees, it produces a more stable knee than any other leg exercise. The important part of the last statement is the “when performed correctly” qualifier. Correctly is deep, with hips dropping below level with the top of the patella. Correctly is full range of motion.

Any squat that is not deep is a partial squat, and partial squats stress the knee and the quadriceps without stressing the glutes, the adductors, and the hamstrings. The hamstrings, groin muscles, and glutes perform their function in the squat when the hips are stretched to the point of full flexion, where they get tight — the deep squat position.

The hamstring muscles, attached to the tibia and to the ischial tuberosity of the pelvis, and the adductors, attached between the medial femur and various points on the medial pelvis, reach a full stretch at the very bottom of the squat, where the pelvis tilts forward with the torso, stretching the ends of the muscles apart. At this stretched position they provide a slight rebound out of the bottom, which will look like a “bounce,” and which you will learn more about later. The tension of the stretch pulls the tibia backwards, the posterior direction, balancing the forward-pulling force produced by the quadriceps, which pull from the front. The hamstrings finish their work, with help from the adductors and glutes, by straightening out, or “extending,” the hip. 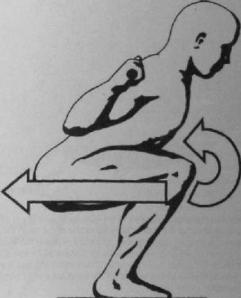 In a partial squat, which fails to provide a full stretch for the hamstrings, most of the force against the tibia is upward and forward, from the quadriceps and their attachment to the front of the tibia below the knee. This produces an anterior shear, a forward-directed sliding force, on the knee, with the tibia being pulled forward from the patellar tendon and without a balancing pull from the opposing hamstrings. This shearing force — and the resulting unbalanced strain on the prepatellar area — may be the biggest problem with partial squats. Many spectacular doses of tendonitis have been produced this way, with “squats” getting the blame.

The variation in squat depth often seen in the gym. A Quarter-squat, B Half-squat, C A position often confused with parallel, where the undersurface of the thigh is parallel to the ground. D A parallel squat according to the criteria established.

The hamstrings benefit from their involvement in the full squat by getting strong in direct proportion to their anatomically proper share of the work in the movement, as determined by the mechanics of the movement itself. This fact is often overlooked when considering anterior cruciate tears and their relationship to the conditioning program. The ACL stabilizes the knee: it prevents the tibia from sliding forward relative to the femur. As we have already seen, so does the hamstring group of muscles. Underdeveloped, weak hamstrings thus play a role in ACL injuries, and full squats work the hamstrings while partial squats do not. In the same way the hamstrings protect the knee during a full squat, hamstrings that are stronger due to full squats can protect the ACL during the activities that we are squatting to condition for. In fact, athletes who are missing an ACL can safely squat heavy weights, because the ACL is under no stress in a correctly performed full squat (fig below).

Another problem with partial squats is the fact that very heavy loads may be moved, due to the short range of motion and the greater mechanical efficiency of the quarter squat position. This predisposes the trainee to back injuries as a result of the extreme spinal loading that results from putting a weight on his back that is possibly in excess of three times the weight that can be safely handled in a correct deep squat. A lot of football coaches are fond of partial squats, since it allows them to claim that their 17 year-old linemen are all squatting 600 lbs. Your interest is in getting strong (at least it should be), not in playing meaningless games with numbers. If it’s too heavy to squat below parallel, it’s too heavy to have on your back.

Olympic weightlifters provide a perfect illustration of the safety and benefits of the full squat. As of the 2004 Olympics 167 of the 192 countries in the world compete in Olympic Weightlifting. More than 10,000 individuals compete annually in IWF (International Weightlifting Federation) events alone, and the number of participants in total from the 167 countries would be staggering, likely on the order of 2 to 5 million (China alone boasts over 1 million lifters). All over the world, weightlifters squat way below parallel safely, most often using some form of the exercise, either back squats or front squats, every day. That is correct: they squat way below parallel every training day, and most programs call for six days per week.

Isn’t it fascinating that they are both strong and not under the care of an orthopedic surgeon? There is simply no other exercise, and certainly no machine, that produces the level of central nervous system activity, improved balance and coordination, skeletal loading and bone density enhancement, muscular stimulation and growth, connective tissue stress and strength, psychological demand and toughness, and overall systemic conditioning than the correctly performed full squat. In the absence of an injury that prevents their being performed at all, everyone that lifts weights should learn to squat, correctly.

Are You Training Or Exercising? Rippetoe ‘Throws Down’ (as usual!)

Conditioning is a Sham – A Must Read Article

T NATION | Conditioning is a Sham.

A great article by Mark Rippetoe. Worth a read by all, but especially beginner/intermediate lifters.