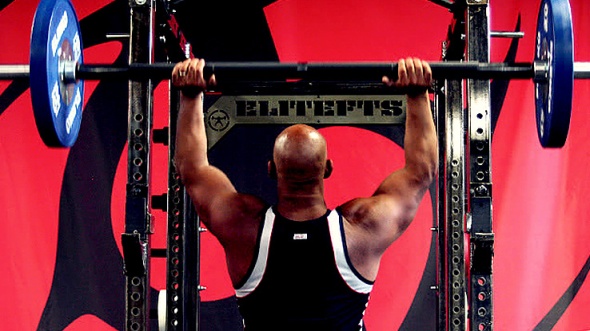 •  Using a thumbless grip on overhead pressing allows for a better path of the bar by bringing it in closer to the centerline of the body. It’s also easier on the shoulders and wrists.

•  Start with a shoulder-width grip. As a visual cue, rotate your hands back towards your delts. If your thumb grazes the outside of them, you’ve got it right.

•  Contract your glutes, abs, and quads when you press. The more tension you have throughout the body, the stronger you’ll be.

•  Activate the biceps on the eccentric portion of the press. When you lower the bar, think about doing a sort of hammer curl towards your face/ears.

•  Press with a purpose. That means press with violence and hate. Try to think about throwing it through the ceiling.

Lots of guys these days shit on any form of seated press, but I’m not sure why. The entire purpose of pressing overhead is simply to build bigger and stronger shoulders. Whether you’re seated or standing doesn’t really matter unless you’re a competitive strongman and … (read more here)

To Spot or Not To Spot – LRB Paul Carter

Originally posted by Paul Carter in his blog Lift-Run-Bang.com

“He touched the bar!” And it’s your fault.

Everyone has had this happen.

You ask for a spot from someone in the gym.  He obliges and you take the next few minutes out to get your bearings to prepare for the set.

It might be for a max, or a rep PR, but inevitably we all eventually have “that guy” that grabs the bar even though we know the attempt would have been good.

This is one of the most frustrating things to happen during a set or attempt you’ve worked yourself up for.  Now, in our mind, it really doesn’t count.  Good for it or not, when the spotter puts his hands on the bar, it’s not “all you”.  No matter how much some “bro” screams that it is.

Luckily, I have three guys in the gym that have spotted me for quite some time that all understand how I lift, and what my sets and reps look like.  The other part of that is I’ve taken time out with each of those guys to explain what I need for them to do.

For bench, no lift off.  Don’t hover.  Don’t touch the bar unless I say so.

On incline, I do get a lift off, but no touching of the bar unless I signal it.

On press behind the neck, I get a lift off, and no touching of the bar unless I signal it.

All of these guys know this.  So I always feel very confident when they spot me.

Well today, I had to ask a guy in the gym for a lift off on press behind the neck that had never spotted me.  He gave me a lift off at 275 and 315.  Both of which I blew up easily for triples.  So I figured I would go ahead and take a shot at a double at 365.

He gives me the lift off … continue reading 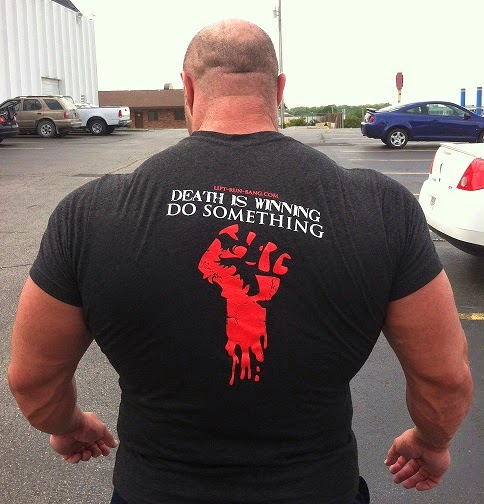 Just Train! – I couldn’t have put it any better!

Been a real hectic weekend so haven’t had time to train, let alone post. However here is just a little something that anyone looking to get big and strong should read! Paul Carter wrote this some time ago and like Johnny Pain has a great no bull in-your-face way of writing that requires no further comment! Read it here : Just Train