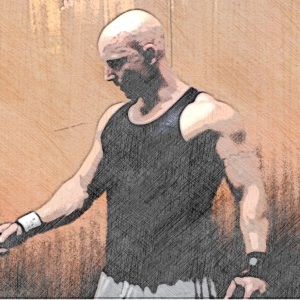 My names Steve Arnold, I’m 36 and I grew up like most, enjoying my teenage years! I smoked, drank heavily whenever possible and did as little as possible. Luckily for me I grew up on the coast so enjoyed outdoor activities like surfing, climbing, skating etc. However, due to this, by my young twenties I was a mere 9 and a half stone at 5’8″ (skinny!). I decided to quit smoking and start going to the gym. It started well, I gained some muscle and my interest in training grew.

After an initial burst of 6 months to a year my gains pretty much tailed off and I plateaued for a while. Luckily I had the benefit of working with some knowledgeable trainers (I worked in a Country Club) who helped me further my gains, but again before long they tailed off again. In 2006 I qualified myself and begun my journey into the fitness industry. Within a year we discovered CrossFit and before long I commited to it entirely. The results can be seen in my Youtube video for CrossFit Bath. http://www.youtube.com/watch?v=puSeYHpHkZM

Although I was super chuffed with my 6-pack, I had dropped to around 78kg and was not actually that happy being small and lean. My true journey then began! I experimented with various methods before coming to the realisation that if you want to be big, you gotta be strong! And since then I have never really looked back.

I followed several different protocols over the years which have brought me up to a good 88kg, and that is where I am now. Currently I want to acheive the 200/300/400/500lb lifts recognised by many as strong. In simplicity that means:

Once acheived, I will re-evaluate and decide where to go from there! (probably higher!)