Crazy weekend! Impulsively bought a camper van on Saturday and didn’t come home till today! Very little sleep over weekend so today was a real grind, just did a simple push/pull workout.

My weekend in a few photos 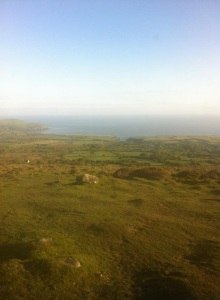 Romanian Deadlift 140kg x8 – Too much knee bend on these, going to lower weight next time and tighten up form.

Training still bitty this week, not quite 100% so going to ease back and return to 5/3/1 RP type training next week – revisiting cycle 7 (last complete cycle).

Really happy with todays session, that’s the most I’ve ever got off the floor – despite the fact it was possibly the worst technique ever, I’m still chuffed – Going to scale it right back for a few weeks to work on form, then try again and see how it pulls 😉

Great to get a decent strength session in, been up an down with illness for a couple of weeks so was great to get back under the bar. Missing a few reps here and there on weights, but it was to be expected after all the time off lately – Grrrr!

Bear Complex: Power Clean/Front Squat/Push Press/Back Squat/Push Press  = 1 rep. 7 reps without putting the bar down is 1 round. No time element, go for 5 rounds aiming for maximum weight by round 5.

Appetite is back with a vengeance today! Pushed for time this week, so did a little session with the weights I have at home and will get down The Shack on Friday and Sunday to get some strength work in.

Been a long while since I’ve done this workout and it was a killer! Started at 40kg, then went up in 5kg steps to 60kg for last round. I was blowing on the last one! 🙂

Busy, busy! Another crazy week! Really need a decent weeks training – It’s felt like when I have had the time, I’ve been ill or my kids have! I’ve been doing chins & press-ups intermittently and today squeezed in a GVT-esque Bench session to see how it felt after coming back from illness. Started with 30kg DB’s and went for sets of 10 with 60 secs rest. After 3 sets, swapped out for 60kg machine chest press for the other 7 sets as still felt a bit drained. Appetites on it’s way back though, so I’ll see how it goes tomorrow! Back on it – I hope

Visiting some old friends in Bath so popped into CrossFit Bath for a little Olympic lifting practice, got up to 107.5kg power clean & press, but couldn’t quite get the 110kg … Technique a bit rusty as not really practiced lately, going to bring them back before deadlifts as I forgot how much I like doing them!

Been a crazy few days & weekend, super busy – Not much training going on! At least I’ll be nice and fresh to hit the bar again this week!

Back Session last thursday, was still struggling from being ill earlier in the week 😦

Creatine Monohydrate – What, Why & How

The average person’s body contains around 120 grams of creatine. Aside from supplementation, foods such as beef and some types of fish, are fairly high in creatine, but a person would have consume huge amounts on a daily basis to equal what can be found in just one teaspoon of powdered creatine as a supplement.

What is it for?

During short maximal exertion bouts of exercise such as weight training or sprinting,
stored adenosine triphosphate (ATP) is the dominant energy source. It is also the immediate source of energy for muscle contractions. Muscle fibers only contain enough ATP to power a few twitches, then additional ATP must be taken in from the bodys stores. Creatine monohydrate is converted into creatine phosphate in the body to keep the ATP pool filled.
What does this mean in the real world? An increased pool of CP means faster and greater recharging of ATP and, therefore, more work can be performed for a short duration.

The Research – (Excerpt from Will Brinks Bodybuilding Revealed)
To date, research has shown ingesting creatine can increase the total body pool of CP which leads to greater generation of force with anaerobic forms of exercise,
such as weight training, sprinting, etc. Early research with creatine showed it can increase lean body mass and improve performance in sports that require high intensity intermittent exercise such as sprinting, weight lifting, football, etc. Creatine has had spotty results in research that examined its effects on endurance oriented sports such as swimming, rowing and long distance running, with some studies showing no positive effects on performance with endurance athletes.

Whether or not the failure of creatine to improve performance with endurance athletes was due to the nature of the sport or the design of the studies is still being debated. But one thing is for sure; the research is stronger in high intensity sports of short duration.
Recent findings with creatine monohydrate have confirmed previous research showing it’s a safe and effective supplement. More recent research has focused on exactly how it works, and has looked deeper into its potential medical uses.

Several studies have shown it can reduce cholesterol by up to 15%, and
may be useful for treating wasting syndromes such as HIV. Creatine is also being looked at as a supplement that may help with diseases affecting the neuromuscular system, such as muscular dystrophy (MS) and others. A plethora of recent studies suggest creatine may have therapeutic applications in aging populations, muscle atrophy, fatigue, gyrate atrophy, Parkinson’s disease, Huntington’s disease, and other mitochondrial cytopathies, neuropathic disorders, dystrophies, myopathies and brain pathologies.
The importance of creatine is underscored by creatine deficiency disorders: inborn errors of metabolism that prevent creatine from being manufactured. People born without the enzyme(s) responsible for making creatine suffer from a variety of neurological and developmental symptoms which are mitigated with creatine supplementation.
As for safety, some have suggested that creatine might increase the need for extra fluid intake to avoid potential dehydration and muscle pulls. Still, creatine has not been shown to increase either dehydration or muscle pulls in the research.
In some people, creatine may increase a by-product of creatine metabolism called creatinine, which is a crude indicator but not a cause of kidney problems. Some doctors have mistakenly thought that high creatinine levels (in athletes using creatine) are a sign of kidney problems, but that is not the case.
Creatinine is not toxic to the kidneys and most doctors are not aware that creatine may raise creatinine levels with no toxicity to the kidneys. People with pre-existing kidney problems might want to avoid creatine due to the effects it can have on this test, though creatine supplementation has never been shown to be toxic to the kidneys and the vast number, of studies to date have found creatine to be exceedingly safe.

It’s interesting to note that there has been a concerted effort by many groups and ignorant medical professionals to portray creatine as being somehow poorly researched (flatly untrue) and unsafe for long term use. They systematically ignore the dozens of studies that exist showing it’s both safe and effective. Even more bizarre, they ignore the recent studies that are finding creatine may help literally thousands of people with the aforementioned diseases. This is unscientific, unethical, and just plain immoral, in my view.

One question that often comes up regarding creatine is whether or not the loading phase is required. Originally, the advice for getting optimal results was to load up on creatine followed by a maintenance dose thereafter. This advice was based on the fact that the human body already contains approximately 120 grams of creatine (as creatine and creatine phosphate) stored in tissues and to increase total creatine stores, one had to load for several days in order to increase those stores above those levels.
The idea also seemed to work well, in practice, with people noticing considerable increases in strength and weight during the loading phase. All was not perfect however as many people found the loading phase to be a problem, with gastrointestinal upset, diarrhea and other problems. At the very least, loading was inconvenient and potentially expensive.
The need for a loading phase was a long held belief, but is it really needed to derive the benefits of creatine? The answer appears to be no, as both research and real world experience have found the loading phase may not be needed after all. A 1996 study compared a loading phase vs. no loading phase among 31 male subjects.
The subjects loaded for 6 days using 20 g/day and a maintenance dose 2g/day for a further 30 days. As expected, tissue creatine levels went up approximately 20 percent and the participants got stronger and gained lean mass. Nothing new there! And, not surprisingly, without a maintenance dose creatine levels went back to normal after 30 days. Then the group was given 3g of creatine without a loading dose. The study found a similar but more gradual increase in muscle creatine concentrations over a period of 28 days. The researchers concluded:
“…a rapid way to creatine load human skeletal muscle is to ingest 20 g of creatine
for 6 days. This elevated tissue concentration can then be maintained by
ingestion of 2 g/day thereafter. The ingestion of 3 g creatine/day is, in the long
term, likely to be as effective at raising tissue levels as this higher dose.”

A more recent study done in 1999 found that 5 g of creatine per day without
a loading phase in 16 athletes significantly increased measures of
strength, power, and increased body mass without a change in body fat
levels (whereas the placebo group showed no significant changes).
The researcher of this 1999 study concluded:
“…these data also indicate that lower doses of creatine monohydrate may be
ingested (5 g/d), without a short-term, large-dose loading phase (20 g/d), for
an extended period to achieve signifi cant performance enhancement.”
So, if you have suffered through the loading phase in the past thinking it
was the only way to maximize the eff ects of your creatine supplement, it
appears you can rest assured you don’t have to go through all that hassle.
A 3 – 5 gram per day dose over an extended period of time will probably do
the same thing.

Which Creatine is best?

Aside from the obvious price differences, there are also several different types of Creatine in the form of creatine monohydrate, creatine citrate, creatine phosphate, tri-creatine malate, creatine-magnesium chelate and even liquid “ creatine serum”. The newest at the moment being Creatine Ethyl-Ester which is apparently the next best thing. The Problem here is that the overwhelming majority of research to date on the effects of creatine and muscle mass/performance used the monohydrate form and most creatine found in supplements and food is in the monohydrate form.

That fact alone should do it, or the fact monohydrate is the cheapest and easiest to obtain supplement should persuade you away from the lesser tested variations.
Many of these companies try to claim monohydrate is poorly absorbed or that it makes you bloat or hold water – However there is yet to be studies performed side-by-side to compare the differences and the research just simply hasn’t been performed to make these bogus claims. We basically have one of the most researched supplements known to man, shown to be safe, effective and cheap and yet for some reason people are still being drawn toward the new fancy unproven products. I’m not for a moment saying they are not effective, just that they are untested over time. Stick with what we know works!