The European Championship and the last 6 months ..

Following on from last post, I weighed in at 83.6kg the night before I was due to travel down to Aldershot but I had been water loading so was confident I’d make weight in the morning. Skipped breakfast, loaded the car with food & drink ready to rehydrate and refuel then hit the road nice and early. It’s a long old drive from Pembrokeshire and weigh-in was 10am-11:30am and I wanted to get in as early as possible so I could eat up!

Typically, my car radiator blew on the way .. perfect .. limped the last 30 miles using all the water I had in the car and heaters on full blast to cool engine, but still ended up missing the morning weigh-in by 10 minutes! Just what I needed. Used the scales they had there to see where I was and was looking at around 82.3. Couldn’t take the risk of having even a quick dioralyte as they weren’t the official scales and I may have gone over. Gutted … Had to wait till the 3pm weigh-in instead, feeling totally dried out and knackered from the hot drive down in the sun and watching the rest of the team fuel up around me. That’ll test your resolve when you are starving and thirsty as hell and having to watch your mates drinking plenty and stuffing burgers etc down their face 😔

Weighed in at 81.2kg by 3pm and spent the rest of the day eating and drinking and trying to regain as much lost water as I could knowing that my performance in the morning was dependent on it. Got a reasonably decent night sleep as was staying with family and was back ready in the morning. Didn’t feel too bad at the time, but warm-ups were feeling heavy and I knew I would have to really push myself to hit my targets.

Squatting opened well for me, hit a comfortable 190kg followed with a 210kg which went up easy so then went for a comp PB of 227.5kg (500lbs) – Didn’t go so well, knee gave way a little at the bottom so the spotters had to step in. That failed lift left me with just a 210kg squat. The judging was quite harsh and several lifters bombed out on depth so by the time bench came around, I dropped my opener down to 140kg. I’m confident I can hit that on a bad day and got that on the board happily. 150kg didn’t want to go up on my 2nd lift and on third lift my shoulder gave way on one side and the bar hit the spotters hand so I was red lighted even though I managed to lock it out (looking back at the video I can see why as not only was the bar travelling unevenly, he looked like he helped me, but when I was on the bench I didn’t feel like it!). My bench is always the first to get hit when I drop weight, especially with limited time to rehydrate again so I knew it was going to be a struggle. Ah well, on to deadlifts, dropped my opener to 180kg as again, I’m confident with that weight, easy lift on 2nd with a 190kg but centre ref had a quick word about bar ‘dropping too quickly’ and then a reasonably easy 200kg at third attempt as by that time it was all I needed to win my category and no point in shooting for a crazy PR.

So, not an amazing total by far, but it was enough on the day to take a European title and after the day I’d had beforehand, I was over the moon to have made it through and not been ‘bombed out’ of the competition at the squats – Plus the trophies were awesome 😉

Following that, I took a little time off and just enjoyed being ‘off-season’ as it seems like it’s been a long time and I’ve been nursing a few injuries for too long. Typically over the next few months I came down with a few illnesses and worst still, my knee gave way on the stairs as I’ve been suffering with patellar tendonitis for a while and sprained the inflamed tendon – yowch! Couldn’t walk for almost 3 days and training was out of the question for a while. My shoulder has also played up ever since, I think I’m getting too old for this lark! Ha ha

Now the last two months I’ve been rebuilding lost strength and trying to rehab my injuries. I have got back to all previous lifts equipped now, but my raw game has taken a big hit not only from the injuries, but the fact I’ve been focusing all my training on equipped lifting and feel my technique has come apart a little when unequipped as it’s a completely different way of lifting.

So now we’re into December and for now I’m really pushing to get my raw lifts back to where I was before I started competing. I’ll try and get some equipped lifting in once a month with the Pembs Powerlifters as I still plan on competing equipped but otherwise all training will be raw.

Life back on track, knee/shoulder calming right down with the focus on rehab and raw lifting and I’ll be posting up on here regularly again – Also, good news, I’ve met a graphic designer who will be looking at my book ‘Hench – A Straightforward Guide to Size and Strength’ as it’s still in Microsoft Word format and then will get it published and hopefully will finally get it out there! For now, back to the Christmas shopping, the joys of parenthood and work, work, work 😉

Preparing for the European Championships

Where to start? Well, not long after last post I contracted a kidney stone & infection, needless to say, very painful and it knocked my training for 6. I pretty much couldn’t do anything for a month and had to pull out of the BPO British Championships in April as I wouldn’t be ready in time. These were qualifiers for the upcoming Europeans so needless to say I was a little gutted!

Thankfully, the president of the BPO has invited me to the Euro’s anyway as I have a ‘justifiable reason’ for not competing at the British, so wasn’t disappointed for too long J

Since then it has been a bit of a slog trying to get back up to previous strength levels. I’ve deliberately gained a little weight alongside training to help my lifts but unfortunately this mean I’m closer to 90kg than the 82.5kg I need to be at the meet and needing to cut 7+kg over the next 5 weeks.

Not an impossible task, but I will need to tighten up my diet and possibly water load again despite being advised against it by my GP. I know the risks and will put more into making sure I’m fully rehydrated for the comp – after this meet I won’t be competing till next year so will spend the rest of the year focusing on health and joint rehab/mobilisation, and possibly even move up a weight class next year to stop having to cut weight each time.

Training through April was just trying to get back to weights I’ve lifted this year and happily I’ve managed to do so, Deadlift back up to 190kg x3, Bench 150kg x2 and Squat 210kg x2. Equipment is a little tighter due to weight gain so pretty sure that’s helping, but still happy to hit my old numbers 😉

May has gone well, I’ve hit 160kg on Bench, 205kg Deadlift and 227.5kg for squat on max week. My goal is still to hit a 250kg Squat, double bodyweight Bench 165kg and another 5-10kg on Deadlift to take me up to my failed attempt at the worlds last year of 215kg. Got to have goals right?

So now it’s June, 1 week to go to the Euro’s, weighed in over the weekend at 87.6kg so I need to drop 5 kg, I’m eating as clean as possible and have easily dropped 3-4 kilos previously by water loading so feeling confident I’ll make weight … Watch this space J 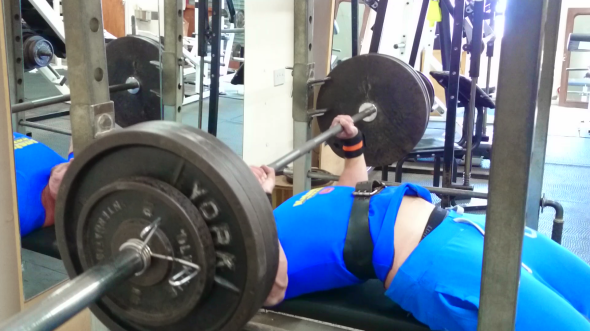