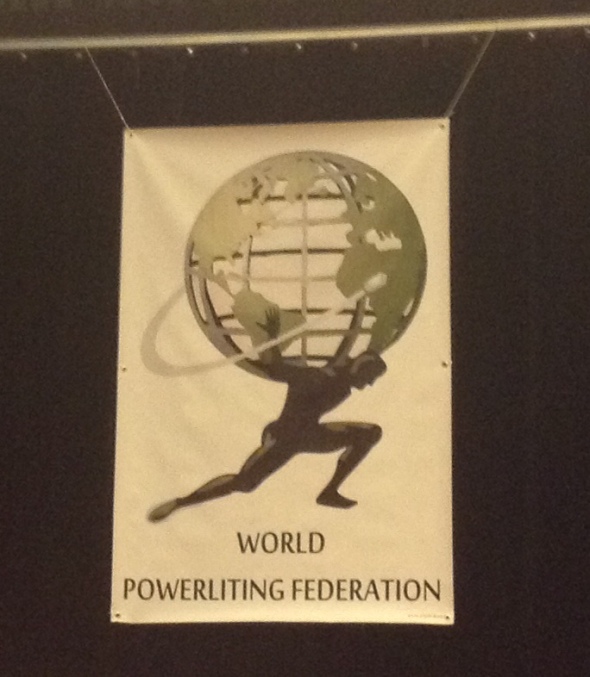 We travelled down to Gatwick overnight Tuesday and flew out Wednesday. Got there in the early afternoon so went for a wander around the local town Voiron and just rested up ready for weigh-in in the morning. Wasn’t sure about weight so kept food to a minimum and drank very little to dehydrate slightly as I would have 24 hours to re-hydrate again anyway. Thurs morning picked up my GB T-Shirt and headed up to the venue and weighed in at 80.3kg 🙂 Great for my Wilks points!

A little more grand than last time! Had a quick nosy around and then as last meet, spent the rest of the day eating, drinking and generally re-hydrating and refueling for a long day. I knew it would take longer than the UK’s as there were 137 lifters entered and 3 flights on the first day (mine of course would be flight 3, but we went up first thing as one of the Pembrokeshire Powerlifters (Jacqueline) would be first flight and we go as a team from opening ceremony/warm-up to closing ceremony.

Got up Friday and had as much breakfast as possible and plenty to drink and headed off to the meet.

Arrived at the venue and headed to the platform to sort rack heights etc and then on to the warm-up room which was a little walk away to help the first flight before I started getting ready myself.

Warmed up with my squats up to a couple of singles at 160kg which was feeling easy, put on my squat suit and did an easy 180kg with loose knee wraps and opened with 190kg which felt easy! Jumped up to 210kg and again, went up a charm so coach put me down for a PB attempt at 225kg. Must be something in the water, happy with a PB on my squat and my closest rival only hit a questionable 210kg so I went 15kg into the lead.

On to Ze Bench Press… Started warming up and my shoulder was twinging a little so slapped some more ibuprofen gel (got through a lot over the weekend!), followed by Deep Heat and it felt a bit better as I did some mobility. Unfortunately there was a bit of a mix-up somewhere and we were told that there would only be two flights for the Bench so we needed to get moving and warm-up. Rushed my warm-up and failed a 140kg which smashed my confidence as I’ve hit 160kg on my own without a handout, but one of the lads came over and gave me some encouraging words and after a few minutes I pressed 140kg and decided to drop my opener from 150kg to 140kg just to be sure I didn’t bomb out! As we headed down to the platform I noticed my French

rival (the 210kg squatter) hadn’t started his warm-up and due to the fact he didn’t understand English, (or knew something I didn’t) wasn’t interested in coming down to the platform with the rest of us.

Should have followed him! After sitting in my shirt for 30 mins and going cold, we found out it was 3 flights (Of course, why the hell wouldn’t it be?) I went back and did another couple of warm-up sets up to 130kg and felt shoulder twinging again, but by now it was way too late. Thankfully hit my opener of 140kg, but failed to hit 150kg on my next two attempts. See the vid on my last attempt, I think the centre ref had fallen asleep, I didn’t hear a press command for what felt like forever, until my coach started yelling but I just couldn’t get it – You can see Paul (Coach), look at him as if to say WTF? Typically Frenchy had a massive Bench, virtually no pause and hit a 180kg which put him ahead by a clear 25kg! – Had I got my gym PR he still would be ahead, but by only 5kg, but hey, it’s what you hit on the platform that counts

We had now been at the venue for over 6 hours and I was absolutely starving! Smashed a pre-workout and some sugary sweets and warmed up for my deads. Not sure if it was in my head, but bar was feeling really heavy and I was going to drop my opener to 180kg, but coach thankfully was there and he just said – ‘what’s on that bar?’ pointing at one on the floor and I said ‘180kg’, ‘pick it up then’ he said and I did! So then we headed down and I pulled an easy 190kg, then a 200kg equaling my best at the UK’s. I then looked over at Paul & Az and they were already filling in my 3rd attempt so I knew to trust them and just got ready to lift. ‘Bar is loaded for Steven Arnold at 215kg’. I thought, F%@k this, I’m having this and went for a 15kg PR. Just couldn’t lock it out, so finished with a 565kg total which is 45kg up from my UK result – PR on my Squat, Competition PB on my Bench and equal PR on my Deadlift. Can’t really argue with that! 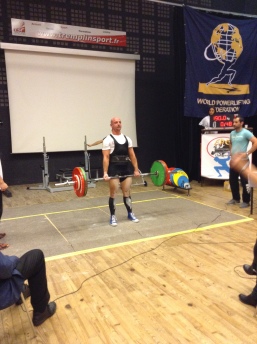 Julien pulled a huge 235kg deadlift and took the gold with a 625kg total so even if I’d hit very lift I would have still come second with a 600kg total. Still, silver isn’t bad for a first World competition, especially competing naturally in an untested federation so I’m happy with the overall result. Now my goal is to get to a 650kg or higher total in time for next year and bring the gold home for GB!

Huge thanks to my Sponsors Chilton Motors, Pembroke Thanks again guys, you were a great help

My First Meet Experience at the BPO UK Open Championships 2014

What a day! To carry on from last post I got up on the Friday morning and weighed in at 83.1kg only 0.6kg over what I need to be on Saturday. No water at all allowed today, only enough to wet my lips when need be! I ate very little over the day and kept it to protein only and BCAA’s and by the evening I was weighing in at 82kg so just where I needed to be. It wasn’t too bad, I was a little irritable and felt really tired by the evening so just tried to relax and not think about how thirsty I was!

Saturday morning stepped on scales to find I had dropped to 81.1kg so treated myself to some scrambled eggs and a coffee which took me back up to just under 82kg with 3 hours till weigh-in. Travelled up to Swansea then for weighing and recorded at 81.5kg so nice and happy and ready to feed up and hydrate.

Immediately after weigh-in I took a sachet of Dioralyte and filled a shaker with electrolyte drink which I kept drinking throughout the day (managed to get around 4 litres in total) and about 2 litres of water. Then hit Greggs for a breakfast baguette 😉

Spent the rest of the day just eating and drinking and preparing myself mentally for Saturdays meet, then one more Dioralyte in the evening.

Got up Sunday and had a cooked breakfast and another litre of electrolytes and relaxed for a bit before heading off to the meet.

Arrived at the hall met up with my coach and the other lifters and headed to the warm-up room pretty much straight away as at 82.5kg I would be in the first flight. Warmed up with my squats up to a couple of singles 160kg which was feeling nice and smooth and opened with 175kg which felt heavy but manageable and submitted my next attempt at 185kg, hit that (just!) with a close call from the judges as my knee just started to drift in a little and the spotters moved in but I got it up anyway and got 3 white lights so happy with that! Went for broke on my 3rd attempt with 192.5kg but something didn’t feel right on the way down, not sure if it was in my head as I had different knee wraps for this attempt as I had been sharing them with a teammate, or just wasn’t ready for it, and failed the lift. Never mind, happy with 185kg so next the bench press ..

There was a half hour break so had a quick protein shake and a handful of jelly sweets to keep sugar levels up and started to warm up for bench. Was feeling really good about this, bar was moving smoothly and shoulder (for once) was behaving and I had no pain at all. I was pretty much learning to lift on command in the warm-up room, I’ve done pause bench in training, but actually waiting for someone to call ‘press’ when in the bottom position, and ‘rack’ before racking it up, was totally different, however I was determined not to get red lighted for missing commands as a few other lifters ahead of me had been doing. Opened with 130kg, and had no problems making the lift so went up to 135kg for 2nd attempt. Bit of a grinder but again, went up and more importantly, no red lights! I was happy with 135kg as a total so just to push myself tried a 140kg but failed to get it. Another half hour and on to deadlifts.

Surprisingly, warming up for deadlifts I felt really strong and confident. I have always considered deadlifts to be my weakest lift but today they were feeling good and I was hoping to get a PR. Opened with a 180kg, easy lockout so went up to 190kg. A little tougher and only 5kg away from my previous 1RM, but again locked out no problem so decided to go for it and attempt 200kg a new PR. My coach then advised me to hitch up my singlet legs and talc my thighs as he could see it was slowing the bar down on lockout, did it and then got my 200kg to bring my total to 520kg.

Happy to have made 7 of 9 lifts and achieving the lifts I wanted I sat down to watch the rest of the competition and award ceremony. I hadn’t been looking at the board so had no idea where I had placed, but I had come to test myself and was quite happy to have made it through and got a good total so when I was called forward as the winner in my category I was over the moon! 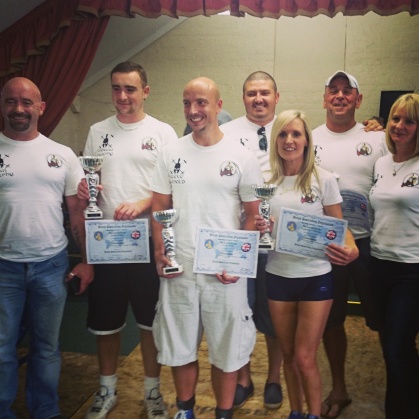 To top it off I received an invite the next morning to compete at the WPF World Championships in France in November to represent Great Britain so I think it’s safe to say a successful first meet!

8 weeks now to prep for the World’s! Yikes!!

On a side note, the BPO doesn’t have a RAW (unequipped) category for lifters so even though I got through the UK’s raw, I will be suiting up for the world’s otherwise I’ll stand little chance of keeping up!

A couple of nutritional articles worth a read..

This was the first article my friend posted onto his website. It’s a little outdated now, however the information is still sound so I thought it’s at least worth reading – Most crucially the last sentence!

Another more up to date article from Pete published on EliteFTS